Community – ‘Ride for Claire’, Ironbark is proud to support the ‘Heart Foundation’ and ‘Cardiac Risk in the Young’

On 27 November 2013 Claire Lee died of a heart attack leaving behind Olive (3 years old), Ned (7 months) and Barney (husband), her family and friends.  Between 18 and 21 March 2015, Claire’s family and friends gathered in memory of her with a number riding from Sydney to Young before being joined by a larger group for a ride from Young to Jugiong on 21 March 2015.  That night a BBQ was held in Wombat where Claire and Barney owned a property.  Ironbark proudly supported the event and Managing Director Doug Hayter completed the Orange to Young leg, a 195km stretch over 11 hours.  Over $33,000 was raised for the ‘Heart Foundation’ and ‘Cardiac Risk in the Young’.  Ironbark would like to thank all those that took part and donated. 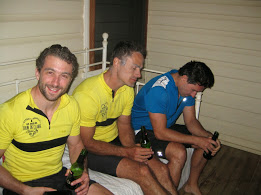